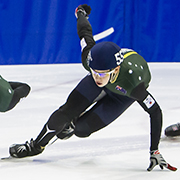 Short track speed skating is a form of competitive ice speed skating. In competitions, multiple skaters (typically between four and six) skate on an oval ice track with a circumference of 111.12 m. The rink itself is 60 m by 30 m, which is the same size as an international-sized ice hockey rink.

Short track speed skating originated in the speed skating events held with mass starts. This form of speed skating was mainly practiced in the United States and Canada, as opposed to the international form, where skaters skated in pairs. At the 1932 Winter Olympics, speed skating events were conducted in the mass start form. Competitions in North America were also held indoors, for example in Madison Square Garden, New York, and therefore on shorter tracks than usual for outdoor skating.

In 1967, the International Skating Union adopted short track speed skating, although it did not organize international competitions until 1976. World Championships have been held since 1981 (though events held in 1976-1980 under different names later received the status of World Championships). After several changes in the name of the competition (last time in 1989), the event is now held annually as the World Short Track Speed Skating Championships.

This article uses material from the Wikipedia article Short Track Speed Skating, which is released under the Creative Commons Attribution-Share-Alike License 3.0. 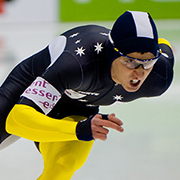 All races are held in pairs, for which two lanes on the track are used. Skaters wear bands around their upper arm to identify which lane they started in. The colours are white for inner lane and red for outer lane. At the back straight, the skaters switch lanes, which causes them both to cover the same distance per lap. When both skaters emerge from the corner at exactly the same time, the person currently in the inner lane will have to let the outer lane pass in front of him. This usually does not cause any problems, as the person in the outer lane will generally move much faster than the person in the inner lane.

Occasionally, quartet starts are used, for the pragmatic and practical reason of allowing more skaters to complete their races inside a given amount of time. This involves having two pairs of skaters in the lanes at the same time, but with the second pair starting when the first have completed approximately half of the first lap. The skaters in the second pair will then wear yellow and blue arm bands instead of the usual white and red.

Skaters race on a two-lane oval rink similar in dimension to an outdoor athletics track. Indeed, an athletics track covered with ice can function as a speed skating track, such as Bislett stadion in Oslo up to the 1980s. According to the rules of the International Skating Union, a standard track should be either 400 m or 333⅓ m long; 400 m is the standard used for all major competitions. Tracks of other, non-standard lengths, such 200 or 250 m, are also in use in some places for training and/or smaller local competitions. On standard tracks, the curves have a radius of 25–26 m in the inner lane, and each lane is 3–4 m wide.

This article uses material from the Wikipedia article Long Track Speed Skating, which is released under the Creative Commons Attribution-Share-Alike License 3.0.